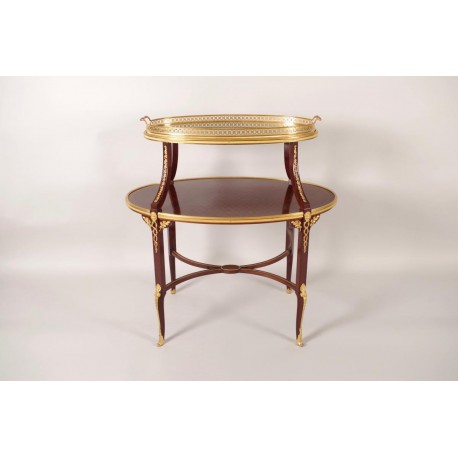 It rests on four arched feet.

A similar model was sold at Sotheby's in New York on October 26, 2006. François LINKE (1855-1946) was undoubtedly the most important Parisian cabinetmaker of his time. Initially apprenticed in his hometown of Pankraz in Bohemia, Linke arrived in Paris in 1875 and founded his own workshop in 1881 at 170 rue du Faubourg Saint-Antoine, later creating a branch at 26 place Vendôme. Linke's international reputation was already well established when the 1900 World's Fair was held in Paris, where his talent and creativity remained unsurpassed: the Fair crowned his success and strengthened the financial stability of his company, enabling him to conquer new markets abroad. Like his contemporaries such as Beurdeley and Dasson, his production included copies and pastiches inspired by the successive styles of the 18th century or the most famous royal furniture, but also illustrated himself in the design of exuberant works, mixing Louis XV and Art Nouveau styles. Linke collaborated in particular with a famous sculptor, Léon Messagé. In 1904, he became an Officer of Public Instruction and participated in the Saint-Louis Exhibition in the United States. In 1905 he was appointed juror of the Liege Exhibition and on 11 October 1906 he was awarded the Legion of Honour.